A few days a go I attended Digital 2014 event at the Celtic Manor in Newport. This was the second year of the event and the first time I had been. Held over 2 days and run by the Welsh Government the purpose is to look at the Digital state of Wales. The first day focused on education and the second on business and how it could improve the Digital playing field. There was a very impressive list of speakers and sponsors and I was very keen to hear what had to be said.

I wasn’t disappointed, I only went on the Monday and as soon as I got there, I could sense the scale and impressiveness of the event. There were workshops running throughout the day, but I wanted to stay in the main arena to listen to the discussions. Jamie Owen from BBC Wales hosted the day with Maggie Phelan presenting the majority of the morning. Their was lots of interactivity with the audience and some alarming statistics. 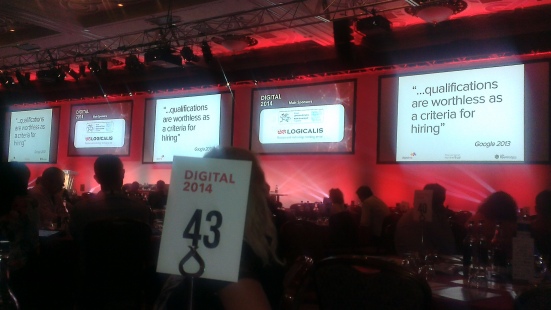 The morning mainly consisted of highlighting the importance of a robust and fit for purpose Digital Education system, we heard from young entrepreneurs who had left school with little IT knowledge and had setup their own business and learnt everything on the job, they had things to say about what education in the 21st Century should provide. There was a pledge that we were asked to sign and support to make sure that actions happened following the event.

The morning got me thinking about my school and the education we provide, is it relevant? The afternoon was much better there were some great speakers, but the highlight was the discussion that followed where the audience took part, it was a real challenging debate that demonstrates how much people care about what we are teaching our young people. The young people themselves also took to the stage to talk abut the education they had received, I listened to what they had to say with some reservation as things have moved on somewhat since then (in most schools) and there is much better provision for IT nowadays.

The end of the afternoon ended with a presentation from Raspberry Pi, although not designed for education, it has huge potential and is defiantly worth introducing into school.

Below I have created a small presentation in Prezi which sums up my thoughts on the day and includes a nice video from Simon Pridham about empowering teachers.